Imagine a summer college internship program that promises the best summer of your life.

Such a program is available through Infosys, a multinational company that provides IT services and business consulting.

The program begins by paying for visa fees and roundtrip airplane tickets to bring students to the Infosys headquarters in Bangalore, India. Courtnee Cruz keeps busy working on Infosys projects in Bangalore, India, but she also gets time to explore the country. Photo courtesy of Courtnee Cruz

The all-expenses-paid internship then covers the cost of students’ food and housing in Bangalore. Housing accommodations are on the Infosys gated, corporate campus. One student said their living quarters look like a five-star hotel.

And the program pays the interns a salary.

There are chauffeur-driven cars and a health club membership, among other benefits. Students are assigned to work on projects they’ve dreamed of, including artificial intelligence, big data, cybersecurity and cloud computing.

The icing on the cake: The opportunity to experience the diversity of India. Because the cost of travel is low, interns travel on weekends to explore the country.

Sound too good to be true?

Not for five undergraduate and graduate students from the School of Informatics and Computing at IUPUI who were selected for the Infosys global internship program, InStep.

Courtnee Cruz, a graduate health informatics student, summed up her experiences since she arrived June 3 with a single word: Incredible. “Every time someone back home asks about it, I can’t even describe it because it is so unique, so different from the U.S.,” she said.

Cruz always wanted to work abroad but had assumed if she did, it would be in Europe. Then she learned about the Infosys internship program. “I saw where it was and thought it was really cool,” she said. “The other main thing was that it is an all-expenses-paid internship, which is rare, and I’m also paid very well. It’s really nice.”

After being interviewed by Infosys about what she wanted to work on, Cruz was asked to design software to predict unexpected hospital visits from patients with chronic diseases. The software is being developed for a major U.S. health insurance firm.

Cruz heads to work about 9 a.m. on weekdays, remaining there until 7 or 8 p.m. Her Infosys colleagues routinely work 10 to 11 hours a day. “That’s very normal, but work is also very social for them,” she said. “There are lots of tea and exercise breaks during the day.”

Interns plan outings to city restaurants, pubs or a cricket match — if not every weekday evening, then every other day, she said. Cruz also travels around India every weekend. Trips to Goa on the southwestern coast and to Kochi, a major port city on the southwestern coast bordering the Laccadive Sea, where she spent the weekend aboard a houseboat, top her list of favorite trips.

Andres Calvillo, an undergraduate majoring in informatics with a specialization in human computer interaction, has also explored India on the weekends, including trips to the Taj Mahal and to the capital, New Delhi. 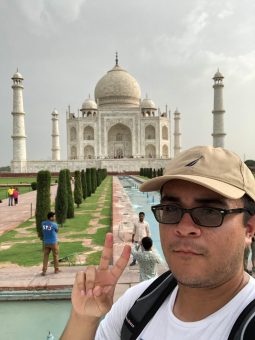 “As a college student, I never expected to be able to travel to a completely different part of the world,” Calvillo said. “I’m grateful.”

Calvillo said he wanted to participate in the internship program as soon as he learned about it: “An all-expenses-paid trip to Bangalore, India, sounded like a really great opportunity to travel and develop my professional skills.”

He was assigned a project to create a solution using computer vision to detect office space availability. His work has included conducting focus groups and creating user personas to better understand users of the service.

Calvillo and Cruz said the program is managed in such a way that safety is not a concern, a factor they believe led some IUPUI students to not apply for the internship.

“Safety is not a huge concern,” Calvillo said. “The internship program offers an opportunity to explore different parts of the world, to get to know what it’s like to travel and work in India. It’s a very unique opportunity.”

“I would encourage people to apply to the program,” Cruz said. “You’ll be in good hands. Everyone speaks English, everything is taken care of, and you will be with people from all over the world.”